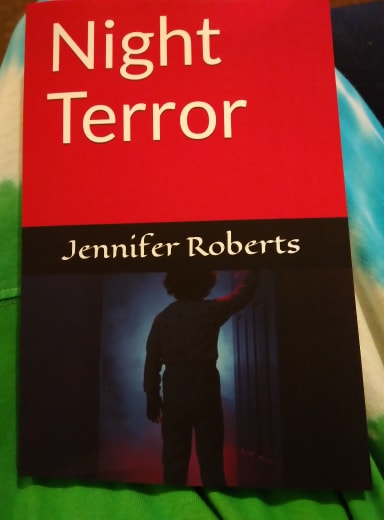 This will be an unusual interview but fun all the same. I will be interviewing myself.

Elizabeth found at an early age she enjoyed stories. Each bringing her into a new time or place that would fill her mind with adventures she could not have imagined before the first lines of each book were read to her. Spending time with her grandmother was her favorite thing in the world and the stories she would read to Elizabeth would only make the visits that much more enjoyable. As she began her schooling, she realized just how difficult it would be to become one of those people who wrote those stories which captivated her as she struggled in learning to read. The love of hearing stories never left though. The love of stories continued even if the part of reading them was frustrating and difficult. It wasn’t until much later in her childhood Elizabeth would learn to read fluently and begin writing poetry.

The first book written by Elizabeth was an autobiography that she soon decided would never be submitted for publication. This work took her a year to write and edit and still sits on a shelf untouched. It was many years later before she worked on another book. In that time Elizabeth had written many pieces of poetry which she stored or threw away feeling she had no real talent and would only write to release some of the emotions and thoughts brewing in her mind. Many years later Elizabeth would stumble on to a website called NaNoWriMo that would challenge writers in the month of November to write 50,000 words. This was the beginning for Elizabeth. She accepted the challenge and anxiously and excitedly began writing all day every day to reach her goal. This was the first book she had ever written.

After the 30 day challenge, she had reached well above her goal. It would be a short story compared to many others and there was no thought put into what the story would be about or how it would progress but this did not stop her writing every day without fail. At the end of the challenge she was pleased with the plot that arose out of the experience. Upon completion there were a few awards that were given. Pleased with this but not expecting much more Elizabeth once again set her writing aside and forgot about it. Several more years passed again before she had revisited her story and began editing it. This is the book she has just published after nearly a decade of writing it. The excitement of writing that first story and the completion of edits and polishing it up was enough for her to decide she wanted to do this forever.

Drawn to horror stories, Elizabeth longed to write in that genre. It would turn out that Night Terror https://www.amazon.com/Night-Terror-Jennifer-Roberts/dp/1707728631/ref=sr_1_1?crid=29THD05ZAHYQK&keywords=jennifer+roberts+night+terror&qid=1574600685&sprefix=jennifer+roberts%2Caps%2C139&sr=8-1 would much better fit into her writing style. She is drawn to almost every genre out there but her first love still remains horror. As a student Elizabeth doesn’t have a ton of time to write but finds time whenever she can to write outlines, plots, character development and such for future works. Unsure of which future work she wants to do next she has many started folders for new ideas. Currently she is setting up character development and setting for a futuristic romantic adventure story. This by no means cements her next publication. Fluttering from story to story could leave any story to be up next.

She generally writes only on the computer with a cup of coffee, smokes, a cool looking lighter, a heavier ball point pen, notebook full of ideas, and 60’s and 70’s music playing on her old-style headphones attached to her computer.  With music blasting in her ears she pounds out word by word on each new idea. When it comes to building up the story though she tends to write by hand in that good old handy and beat up 5 subject notebook. Her husband waits patiently as she spends hours in front of the screen to hear any new ideas or progression that may have been made each day. Though her family is supportive her grandmother in law who has since passed away seems to have been her biggest supporter. After reading Night Terror she encouraged Elizabeth daily to continue the series. Unfortunately, she would not live long enough to read any further in the series. The book has been dedicated to her. Her inspiration continues to be the reaction of her grandmother in law. She truly enjoyed the story and looked forward to more. If other readers feel the same way, Elizabeth knows she’s done her job.

As a writer Elizabeth feels bringing the reader into the hearts and minds of her characters can be the only thing. ‘Learning to love or hate your characters connects you to them.’ Family and friends are of course encouraging but inspiration is solely from the other authors she has read. Edgar Allen Poe has been a favorite since her teenage years. Others include the likes of Stephen King and Dean Koontz. There are many other authors and types of books Elizabeth enjoys but when it comes to dark and twisted, these three are her favorites.

Outside of writing Elizabeth enjoys anything creative and has tried her hand at any type of crafting she can get a hold of. Years ago, she decided one day she was going to make gifts for her children for Christmas. She spent months creating some of the coolest rag quilts before she knew what a rag quilt was, incorporating old clothing and items her kids enjoyed. This creative streak has never left her. She attended art school and received an Associate’s degree. Though nothing came of the art degree, she has enjoyed anything artistic since. As a psychology student Elizabeth enjoys adding some psychological aspects to her writing to make the actions and thoughts of her characters more believable.

In writing, she set her target for young adults to read but is quickly finding that this range is too small. Night Terror appears to be of interest to young adults into the 35 year age range. Chuckling, Elizabeth says this ‘IS’ young adult.  Though Night Terror is Suspense/thriller, Elizabeth still strives to experiment with all genres that interest her and eventually work her way up to horror. Though she has never foreseen best author success as a goal, she would like to be able to walk into a Barnes and Nobles and see her books on a shelf. Giving readers the opportunity to experience her work is all she really wants.